The man who talked poetry

Yosa Buson (1716–1784), a Japanese poet and painter of the Edo period. He is one of the four masters of haiku, the others being Matsuo Bashō, Kobayashi Issa and Masaoka Shiki.
It has been said that Buson admired Bashō greatly (The Narrow Road to the Interior was a source of inspiration for the young poet) but could never surpass him. That didn’t prevent me from giving this collection a 5-star rating, the first of 2019.
In haiku “one must talk poetry”, declared Buson once, and he absolutely did. I have never read anything by him before so I’m barely getting over my sense of astonishment, barely gathering some notes, as I listen to the sound of crashing waves; staring, from time to time, at the foam bathing the rocks from the balcony of grim thoughts. Ah, vacations.

This isn’t such a popular book on this website; only one person has read it and despite the favorable rating, I had my doubts. Prejudices aside, I’m so glad I read it. I didn’t expect to find so many beautiful poems. If I shared all the ones I highlighted, I’d spoil the entire collection. I compared these translations by Gabriel Rosenstock with others I found and realized that they were rather accurate – although I would’ve loved it if they had included the Japanese versions, only rōmaji is never enough. But the real shame is that the afterword is in Irish, and judging from the poor translation I was able to attain, there’s valuable information about Buson and his art. 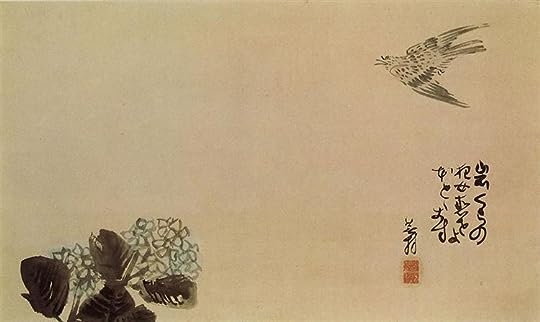 All in all, this book stands testimony to the way in which Buson mastered the art of capturing one single moment in three lines by using a rich, visually detailed language. Nature and the physical and emotional effort of being human were magnificently illustrated by this artist. He gave voice to the despondent crow, the despairing sparrows, to someone in need.

Buson’s juxtaposition of different but equally evocative images was reminiscent of the fundamental dichotomy that rules our lives. His poems reflect the much desired ability to combine mastery of language and unique sensibility. The themes and their connections are infinite, as the following quotes show. Nature and humanity, entangled. An accidental metaphor for human duality. The human contradictions of a frog. A compassionate approach to make beauty out of chaos. 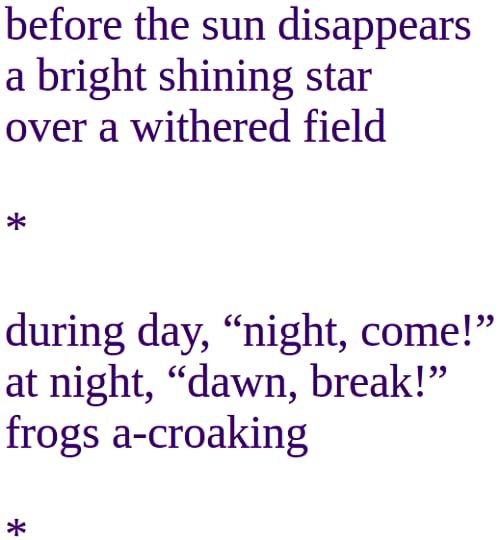