How lovely
through the torn paper window
—the Milky Way

Born as Kobayashi Nobuyuki in 1763, in today’s Nagano Prefecture, the poet later known as Issa got acquainted with death since his early years. Such loneliness and his love for nature were portrayed in the over 20.000 haiku he wrote. Frogs, sparrows, snails, mosquitoes, flies – all seen through his candid eyes. The compassion and frankness of childhood.

Just myself
Also, one fly
—an enormous house

Some of Issa’s work has been translated and brought to us by Nanao Sakaki (1923-2008), another Japanese poet. This particular collection includes Sakaki’s handwriting in the English and Kanji version of each poem, something I could have lived without. It made the edition look sloppy to me.

The book ends with an interview with Sakaki. When talking about the differences between Issa and Bashō, he said that the latter “is more revolutionary personality. He was born upper class samurai, very good education… If he had no education, maybe he could have been much greater poet”. According to the translator, Bashō had a powerful intellectual background whereas Issa had “nothing, no education, he learned only from his life. So that is more closer to everybody”. In that sense, the poet who once wrote the world of dew/is just the world of dew/and yet… and yet has more reality. A compassionate nature that Sakaki regards as something we are born with, and cannot be made.
Finding such a little bit of empathy is becoming more difficult with each passing day.

Inch by inch—
Little snail
Creep up and up Mt. Fuji 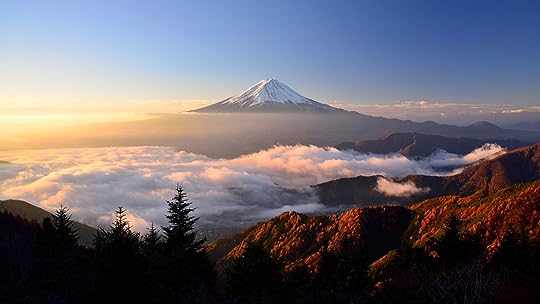