By the sea stands a green oak tree;
A golden chain strung round it:
And on the chain a learned cat
Day and night circles round it;
Walking right, he sings a song,
Walking left, he tells a tale.
— Alexander Pushkin 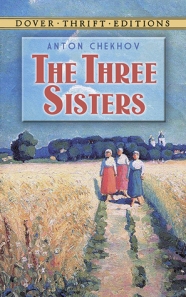 The tale, this time, is not about Ruslan and Ludmila, the epic poem written by Pushkin and published in 1820, whose opening lines were inspired by the author’s favorite tree, which turned out to be a mulberry tree in Taganrog, in southern Russia. Between us, and as some residents said, he wasn’t under the obligation to know botany.¹
The tale, this time, is a play written in 1900 by Anton Chekhov about the Prozorov family, especially the three sisters: Olga Prozorova, the eldest, a high school teacher and then headmistress; Masha Kulygina, the middle sister, unhappily married and often reciting the first lines of Pushkin’s poem; and Irina Prozorova, the youngest, stuck in a provincial town as the rest of the family and always longing for Moscow, where she would find her true love. Another exhausting quest for meaning in a life which is filled with trials and tribulations and some gleams of light in between.

IRINA [lays her head on OLGA’S bosom]. A time will come when everyone will know what all this is for, why there is this misery; there will be no mysteries and, meanwhile, we have got to live . . . we have got to work, only to work! Tomorrow I’ll go alone; I’ll teach in the school, and I’ll give all my life to those who may need me. Now it’s autumn; soon winter will come and cover us with snow, and I will work, I will work.

VERSHININ [after a moment’s thought]. Well, I don’t know. . . . It seems to me that everything on earth is bound to change by degrees and is already changing before our eyes. In two or three hundred, perhaps in a thousand years — the time does not matter — a new, happy life will come. We shall have no share in that life, of course, but we’re living for it, we’re working, well, yes, and suffering for it, we’re creating it — and that alone is the purpose of our existence, and is our happiness, if you like.

The play is infused with other elements that reminded me not only of Pushkin but other two² great Russian authors: entangled family dynamics, soldiers and barons, adultery, hypocritical manipulation, a duel based on nothing, unconditional love which has been silenced for years, reflections on human existence and its meaning…

TUZENBAKH. Well? When we are dead, men will fly in balloons, change the fashion of their coats, will discover a sixth sense, perhaps, and develop it, but life will remain just the same, difficult, full of mysteries and happiness. In a thousand years man will sigh just the same, “Ah, how hard life is,” and yet just as now he will be afraid of death and not want it.

…and above all, longing. The characters have different aspirations that converged in the mitigation of loneliness. That’s what fascinated and repelled me at the same time because it’s not a foreign notion to me. The thought, the conviction even, that after achieving something, after going to a certain place, life will be as we dreamed it. And most of the times, having accomplished what we wanted while contemplating the sights of the new residence in which we’re dwelling, happiness becomes ever more elusive.

VERSHININ. The other day I was reading the diary of a French minister written in prison. The minister was condemned for the Panama affair. With what enthusiasm and delight he describes the birds he sees from the prison window, which he never noticed before when he was a minister. Now that he’s released, of course he notices birds no more than he did before. In the same way, you won’t notice Moscow when you live in it. We have no happiness and never do have, we only long for it.

Or perhaps there is more beyond longing, if the responsibility for a moment of happiness – because that’s all there is³ – is not put on something or someone else.

* Photo credit: Book cover via Goodreads
** Notes
1. The New Yorker, “Pushkin’s Favorite Tree”. February 17, 2010
2. Why of course, Tolstoy and my all-time favorite, Dostoyevsky.
3. Allusion to a passage from Fernando Pessoa’s The Book of Disquiet: There’s no happiness without knowledge. But the knowledge of happiness brings unhappiness, because to know that you’re happy is to realize that you’re experiencing a happy moment and will soon have to leave it behind. – Enjoy it, then?