A few years ago, The Times newspaper ran a headline on the front page which said ‘Hawking: God Did Not Create Universe’. The article was illustrated. God was shown in a drawing by Michelangelo, looking thunderous. They printed a photo of me, looking smug. They made it look like a duel between us. But I don’t have a grudge against God. I do not want to give the impression that my work is about proving or disproving the existence of God. My work is about finding a rational framework to understand the universe around us.

Catechist, atheist, agnostic; I’ve been there. So naturally, my main interest in this book is that haunting question regarding the existence of a god, the creation of things. I had faith, I don’t know where it went; perhaps a part of it went with the books I’ve read that made it impossible for me to absorb some notions without questioning them. I told a priest once and he looked at me as if I were selling drugs and tickets to strip clubs at school, not without expressing how presumptuous human beings are for wanting to know everything. A similar reaction is mentioned in this book.

Needless remarks aside, a feeble faith tinged with fear – whereas it represents some obvious disadvantages – keeps the mind open. What do you have? The laws of nature or a self-existent and eternal being that created time and space. The complete absence of destiny or someone to blame for lousy decisions. The serenity of dust or the afterlife – on whichever side you get, because you believe or you don’t. There is no wager here. There’s a chance that an omniscient designer is going to notice that you’re believing “just in case”. I prefer the afterlife Hawking describes: wishful thinking.

This scientist, key factor in singularities and father of Hawking Radiation, is also the master of analogies. The content of this book is a pedagogic challenge and yet, he makes it approachable. Some ideas and quotes appear more than once throughout the book (those already familiar with Hawking’s work may be less enthusiastic about this) but I didn’t mind; more resources for me to retain rather complex processes, while there’s still light. 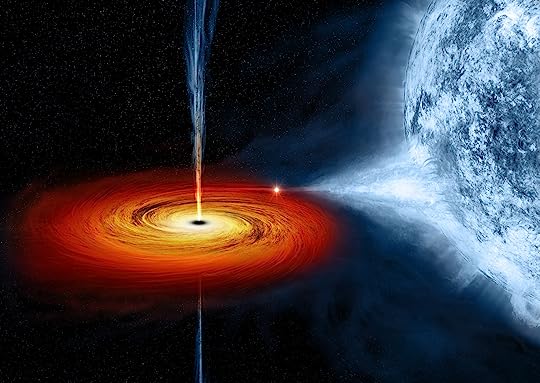 Some of the Big Questions and one-sentence quotes:

Is there a God?

If you accept, as I do, that the laws of nature are fixed, then it doesn’t take long to ask: what role is there for God?

How did it all begin?

We are the product of quantum fluctuations in the very early universe.

Is there other intelligent life in the universe?

I shall take this [intelligent life] to include the human race, even though much of its behaviour throughout history has been pretty stupid and not calculated to aid survival of the species.

What is inside a black hole?

Black holes are stranger than anything dreamed up by science-fiction writers, but they are firmly matters of science fact.

There was a young lady of Wight
Who travelled much faster than light
She departed one day
In a relative way
And arrived on the previous night.

How do we shape the future?

If you know how something works, you can control it.

The book includes comments of those who knew Hawking:
teacher, mentor and friend.

2 thoughts on “Brief Answers to the Big Questions – Stephen Hawking”