Georg Trakl was born in Austria in 1887. He started writing poetry at a very young age, however he later decided to study pharmacy. After that, he enlisted in the army but never stopped writing. During World War I, he worked as a medical official. He witnessed the harrowing consequences of the war (a battle in Grodek inspired one of his last poems). As he found himself surrounded by wounds and death, his depression – which he suffered all his life – worsened and eventually died of an overdose of cocaine at 27.

.
Many of these events and the emotions they prompted appear in his poetry, which is gracefully tinged with the colors of Expressionism. 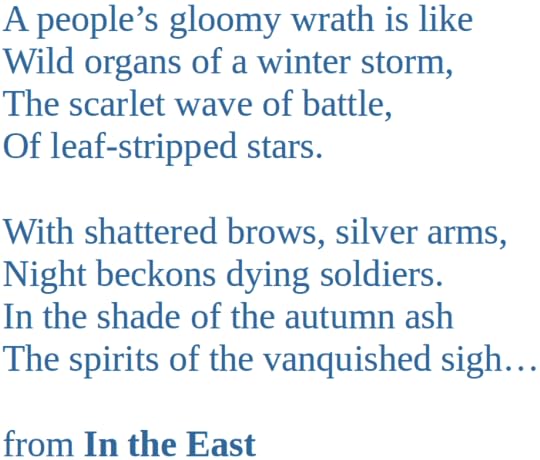 .
Trakl’s poetry abounds with nostalgic reminiscences, the bleak colors of the evening, the reverberation of silence. But above all, with the images of death. A dark imagery which creates a sad and oppressive atmosphere.
.

.
His delectable language, which fluctuates between fragility and strength, brims over with allusions to death. It’s definitely hard to explain, but despite the beauty of the language, the considerable amount of references to such theme started to get a little tiresome. After reading a bit about his life, I understand. Nonetheless, I felt like I was reading an obituary. A long, bluish lament that after a few pages became somewhat monotonous. It reminded me of my experience while reading Cioran and his overused concept of darkness.
In this sense, I wasn’t able to connect with Trakl’s verse – though I did enjoy his prose, and that explains the 3-star rating:
.

.
My levels of enthusiasm varied widely, regardless of my penchant for melancholic poetry (but this was beyond melancholic; I couldn’t handle the lack of balance). After a while, the sense of expectancy was gone. I already knew that the next page was going to show me another shade of the recurring theme of this collection. Lethal predictability.
.

One thought on “Poems and Prose: A Bilingual Edition – Georg Trakl”