It is a truth universally acknowledged that the longer and more carefully we look at a funny story, the sadder it becomes.
— Gogol 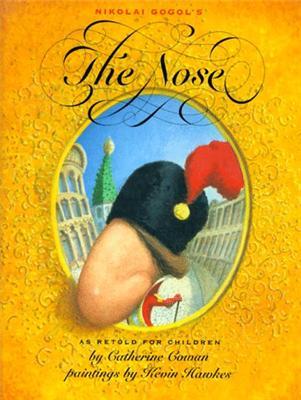 As expected, this is a hilarious story. After an intriguing introduction that I shall refrain myself from explaining, we are told that a man woke up, looked at his mirror but didn’t find any labyrinths of time nor tigers that haunt dreams. He only noticed that his nose had disappeared. Was it during the night? Perhaps a second before he opened his eyes. We will never know. But, in an act that can only be described as a heinous betrayal and a challenge to every manifestation of reason, that part of his body escaped from the surface of his respectable-looking face and became a well-dressed entity, very pleased with himself and, oddly, with a better social rank than his. Ah, and he was so proud of that rank! You know, he is the kind of person to whom you might ask about the weather and after a minute, you would find yourself listening to a fine gentleman boasting about his important occupations and the comforting feeling that his significant social status gave to him. Nothing profound, certainly. That sort of weakness might be suitable for someone of lesser rank, not him. Following this line of thought, remember, you would have the good fortune of listening to his distinguished conversation only if you belong to a similar status as his, otherwise, I’m afraid he will not be able to answer to you. That would be beneath him. Do not get me wrong, I am not trying to hurt your feelings. I am merely imparting what I regard as relevant information, a dash of knowledge, a gram of wisdom, if you will: the rules of civilization, no less!

You should know by now that the person I am referring to, the one who inspired these ridiculous lines—such drivel that he would unquestionably enjoy nonetheless because, after all, we are all talking about him—is no other than our friend Collegiate Assessor Kovalyov (now, if you would be so kind as to call him ‘Major’, that would help him make it through the night; to gently caress the ego of these upstanding members of society always ensures them a good night’s sleep). Oh, the man sans nose. He could still breathe so that was not an issue, obviously. Notwithstanding, there was a visible absence on his face that surely made him feel self-conscious about his appearance. Who wouldn’t understand?

You might think that the source of his distress was also the fact that he could no longer smell the fragrance of fresh-ground coffee (although he would prefer tea, I suppose). Or the perfume of a woman with whom he might have dreamt of the other night but would not speak about, not to one soul, wishing that such memory would return to the bleak corner of his disobedient mind, where it should have stayed; those little nooks under the shadows of the world that hold unavowed dreams and nightmares that ruin normal sleep patterns. Or the aroma that comes from the snuff-box belonging to a thoughtful clerk who might not be aware of our friend’s refined taste.
No, the superficial side of human nature would not allow such luxury. Not being able to show his face in public struck fear into his heart. We are in no position to judge here because every individual would feel the same way. Yes, sir. Who wouldn’t understand?

Once the glimmer of satire has vanished completely and a state of reflection has emerged from the depths of the unconscious, you will discover that underneath this funny story lies the countenance of misery; timid, distant, determined. The anxiety caused by the look of another person. The condescending sneer from a superior. The mockery directed at an inferior. The need to have a respectable place in society and the urge to cling to it as if your life depended on it. Which, at some degree, unfortunately, it does. A natural consequence of people’s priorities. You do understand.
Gogol, whose name is another universe so different from Dostoyevsky’s and yet with countless similar facets, mastered the art of blending humor with tragedy, sheer absurdity with varying nuances of misfortune. Like a chameleon and its unusual ability, his language gradually varies from paragraph to paragraph—entertaining lines might take the form of serious statements filled with amusing nonsense that, by the end of the story, might resemble a set of words dripping the sort of lyricism that transports you to another place defying the laws of time, space and apprehensive dispositions.

From that moment on, the thoughts that were impatiently dwelling in some obscure corner that no one would wish to see, manage to free themselves, to leave their self-absorbed bubble. Engulfed in flames of wintry colors and whispering voices, threatened by their wild nature, what are we supposed to do?

Look at the windows as you walk by. Better yet, do not go outside. Go to the bathroom where that wide mirror awaits for you every morning when you are most vulnerable, after walking aimlessly through the bedroom because of three or four hours of lousy sleep. Or reach into your handbag and pull out the small mirror you carefully hide from the world—a futile attempt to deny the existence of some vestige of vanity that might still reside in you.
In an act of moral courage, we could take a look at what that spotless piece of glass may reflect. We could stand in front of it, hold it before our eyes, struck by fear or overcome with joy, in deep, almost mystical contemplation, just to see ourselves through the perception of others, as we try to grab the nearest lifesaver for we might be sinking in a sea of inhibition; rough waters that may reveal a possible craving for social validation with fluctuating degrees of intensity, knowing all the time that any degree could dissolve all trace of reassurance, at the same speed an ice cube melts in hot water. To touch and recognize everything that visually defines us and emotionally affects us. More importantly, to find out, to bring to light. To actually discern what we might have lost yesterday, a while ago; during the minutes that have died and now belong to an uncertain space composed of unreliable memories and remnants of immortality. The things we are about to lose today. Things I would not want to lose tomorrow but that, as with anything in life, in fact, I may have never even had.
* Austen and Gogol have partaken in the creation of the first sentence. I share with you this classified piece of information before Collegiate Assessor Major Kovalyov takes the credit for it.
.
* Photo credit: Book cover via Goodreads.