Rating: ★★★★★
12/6/14
.
You just have to read this. Even if you are a Christian, you should read about every point of view, to form or change (or not) your own. Russell explains complicated things which such clarity, a little of humor… It doesn’t get tedious, at all.
Take “The argument of design”, for instance. 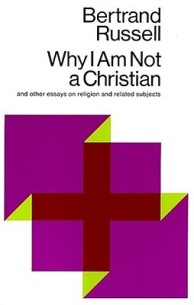 I really cannot believe it. Do you think that, if you were granted omnipotence and omniscience and millions of years in which to perfect your world, you could produce nothing better than the Ku Klux Klan, the Fascisti, and Mr. Winston Churchill? Really I am not much impressed with the people who say: “Look at me: I am such a splendid product that there must have been design in the universe.” Therefore, although it is of course a gloomy view to suppose that life will die out — at least I suppose we may say so, although sometimes when I contemplate the things that people do with their lives I think it is almost a consolation — it is not such as to render life miserable.

Funny. You could then talk about free will and that is acceptable; we could discuss it until we reach the point of uncomfortable silence because we both know we are not going to change our minds, and then we’ll have a cup of coffee, a piece of pie and never leave the safe “weather conversation” zone, again. Or, at least, for a couple of days. Because, if I am one of the products on which design in the universe is based… That is something only my mom would say.
Anyway, my point is, he is that clear. His thoughts are written with the wit and simplicity of great philosophers. The moral and emotional questions are a key ingredient in this brilliant essay that tries to explain “a religion based primarily and mainly upon fear”. You can like it or not, but it is still a memorable work.
.